It’s Hollywood, Jim, but not as we know it 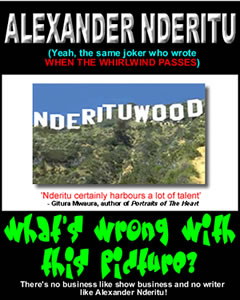 It would appear that rumours of Alexander Nderitu’s demise were greatly exaggerated. Nearly two years after releasing his debut e-novel, 'When the Whirlwind Passes', the former movie reviewer is back with 'What’s Wrong With This Picture?', a comedic stage play about Hollywood.

The farce revolves around Jack Lloyd, a failed Alfred Hitchcock, whose attempts at producing a hit movie in California are frustrated at every turn. He is what Graham Greene might have called, ‘a burnt-out case’.

Although Nderitu admits that he was under the influence (of instant coffee) when he wrote this comedy, he believes that his unflattering portrait of the Hollywood film-making scene is more accurate than most people would like to admit.

‘People still have this fairy-tale image of Tinseltown,’ he says. ‘They think it’s a magical place paved with gold and populated with smooth young men and angelic little girls. Well, it’s not… Movie-making is an expensive, complicated and difficult affair. Don’t let the red-carpet glamour fool you.’ Nderitu echoes the sentiments of producer Michael Hauge who wrote, ‘The process of making a film involves so many people, so much money, so much talent, so many egos, so many physical obstacles and so may things that can go wrong that it is a near miracle every time a movie gets made, let alone is any good.’ ('Writing Screenplays That Sell', Elm Tree Books, pg.287-288).

‘What’s Wrong With This Picture?’ (or, more accurately, ‘How Alexander Nderitu Sees Hollywood’) is written in a style reminiscent of humourist S.J.Perelman ('Acres & Pains', 'Crazy Like A Fox') and dedicated to ‘the granddaddy of playwrights’, William Shakespeare. Most of the action takes place on a film set and features a large cast of well-portrayed characters.
(c) Alex N Nderitu http://www.alexandernderitu.com/