The Children’s Book Market In Kenya

Publishers out to burst the myth that Kenyans don’t read

By Alexander Nderitu
The children’s book market in Kenya, East Africa’s most vibrant economy, has enormous potential but is currently being hampered by various challenges, including government regulation and poor distribution. Regulation comes in the form of the Kenya Institute of Curriculum Development (KICD), a state corporation, whose core mandate is to develop school curricula (below university level) and vet both the school text-books as well as “support materials” that are read in schools.

“Most children's books that parents buy are ‘readers’ from lists approved by KICD,” says Ben Shilolo, the sub-editor of Sage magazine. “KICD gives guidelines on developing these stories, which include themes, length of sentences and story, vocabulary and so on. The problem is that authors do not have freedom to be creative. For example, if a word such as ‘peace’ is suggested, authors struggle to fit in.”
Primary education is free here, which makes the school market highly lucrative because each year the gov’t has to purchase over Kshs 10 billion worth of “teaching material”. In 2016, for example, the gov’t distributed 4.8 million textbooks to more than 20,000 public primary schools under the Tusome Project alone. But to be able to get a piece of this pie, publishers have to comply with KICD guidelines. “Books creatively written without these guidelines in mind,” Shilolo continues, ‘may not be approved, meaning parents will not buy. And, if you force the story to fit into KICD guidelines, it is watered down and becomes less interesting.”

It is important to note that KICD’s policies are not draconian or punitive – just limiting. KICD doesn’t ban or discourage independent publishing of children’s books or YA material but they do act as gate-keepers to the largest market segment for Kenyan literature - school children. “There are no exclusive children's bookshops because parents ‘only’ buy books that are listed (by KICD) and recommended by teachers rather than browse for books with children,’ says Muthoni Garland, a Caine Prize-nominated author and founder of an innovative publishing house called Story Moja.

KICD are quite open about their “research-based curricula development” process. They invite “internal and external customer complaints” via telephone or their online presence and have been giving regular updates, on the new curriculum they are currently developing, on social media using the hashtag: #CurriculumReformsKE. “In the new curriculum, Digital Literacy will be instilled in the learners from the Pre-Primary level,” ran one update. “It is aimed at encouraging learners to be innovative/creative and this will help them to effectively use information that is channeled through any digital platforms.”

Publishers as also still reeling from a recent 16% tax levy slapped on all educational materials - including books - that the Kenya Publishers Association (KPA) had vehemently opposed. Not only does it raise the cost of books but is also seen as a “tax on knowledge.” Then KPA chairman, David Waweru, advised the gov’t that, being the biggest buyer of books, it would actually be taxing itself, but to no avail. (The current KPA Chair is Lawrence Njagi of Mountain Top Publishers). “The cost of production is high,” says Betty Karanja, a veteran publisher. “Made worse by VAT on books. Children's (story) books are also not reaching the intended user. Most schools and parents and even publishing houses invest more on text books.” Longhorn is the only publishing house listed on the Nairobi Stock Exchange. Betty also observes that while there are no exclusive children’s bookstores, most major bookshops – like Text Book Centre and Bookstop - do have dedicated sections for children's books.

Gov’t regulation, however, is not the only obstacle to expanding the children’s literature market in this country of 40 million people. “The other challenge,” Shilolo says, “is getting illustrations right, quality, and competition from imported books which always look better.” Muthoni Garland concurs: “One of the greatest shortages we face as a publishing industry is a lack of trained and talented editors. This affects Kenya’s ability to consistently produce high quality books. Editing talent is proportionately expensive yet few publishers are prepared to train fresh editors as it takes a lot of time, expense and commitment. The second biggest (challenge) is that it is teachers who almost exclusively determine which books get bought and read. Teachers are generally very conservative and prefer books to shout/preach moral messages. Thus many books are not that exciting for kids to read as they are not written or edited with the consumer in mind, but rather to meet the demands of the influencers.”

Muthoni Garland has no qualms about her company’s literacy promotion efforts being “skewed towards children” because a relationship with books needs to be inculcated at an early age. Shortly after it was established, StoryMoja – a limited company often viewed as a literary movement – realized that most rural schools in Kenya do not have libraries and rarely have any “supplementary reading materials.” They started the Start-a-Library project which continues to deliver donated books to schools all over the country. StoryMoja also runs the popular StoryMoja Festival which takes place annually, in the month of September. Kenya’s other notable book festival, the annual Nairobi International Book Fair (NIBF), also takes place in the month of September. NIBF is held under the auspices of the Kenya Publishers Association (KPA) in partnership with Text Book Centre Ltd.

In 2015, StoryMoja led Kenyan primary school students into unofficially breaking the Guinness World Record for “Most People Reading Aloud from the Same Text at the Same Time from Different Venues.”  The “Storymoja Read Aloud” event, held on 15th June 2015, brought together 229,043 pupils from 1,097 schools scattered across the country. The exercise was a step towards promoting a “reading culture” amongst children and shattering the myth that “Kenyans don’t read”.  The text that was read out aloud was a passage from the children’s sci-fi book, Attack of the Shidas (StoryMoja), authored by Muthoni Garland herself. Officially, the Reading Aloud record is currently held by the United States of America, with 223,363 people in 909 venues.

Posted by Alexander Nderitu at 1:32 AM No comments: 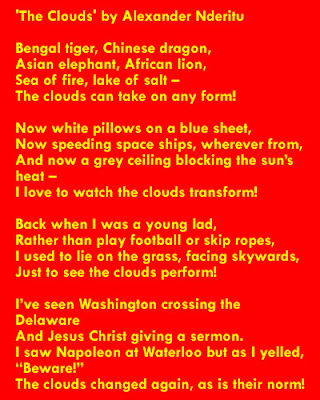 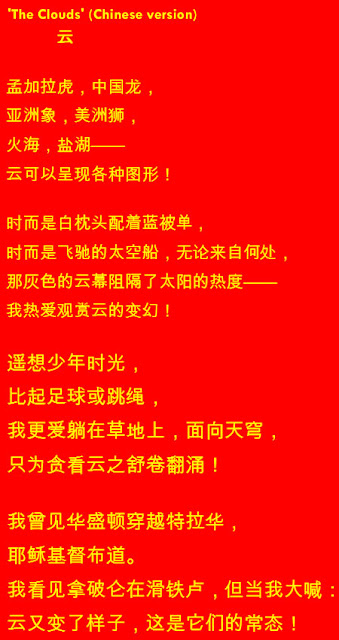 Posted by Alexander Nderitu at 12:12 AM No comments: