I still remember the tingle of excitement I felt when I received my copy of this poetry volume through the post office. I was in Kenya and the package had been sent from Mongolia via Japan. I took the large brown envelope home, opened it and retrieved the glossy brown-black-covered paperback. The title was World Poetry Almanac 2015-2016. However, it was a special edition of the series, a 10th anniversary celebration. Founded in 2006, by Editor-in-Chief Hadaa Sendoo, the World Poetry Almanac (WPA) publishes a wide range of poetic styles and voices from all over the globe. Copies are also donated to the British Library, the UNESCO library, the American Library of Congress and the Swedish Academy.

World Poetry Almanac 2015-2016 contains the works of 116 poets from 77 countries. There’s a very smooth feel to the pages. Abstract art adorns the page margins. Page-size full-colour photos occasionally break up the textual pages. They mostly depict natural scenery from around the globe. There are three ‘featured poets’ on the front and back covers: Ko Un (Korea), Simin Behbahani (Iran) and Yves Bonnefoy (a Franz Kafka Prize winner who passed away in 2016).

Never before have I read an anthology containing so many prominent poets! The work is well curated and the contributors range from Nobel Prize nominees to unknown but gifted scribes living thousands of miles from each other. One of the more recognizable names is Derek Walcott (Santa Lucia) whose poem After the Storm appears in the anthology. The author of many poetry books and over 30 plays, Walcott won the Queens Medal for Poetry in 1988 and the Nobel Prize for Literature in 1992. As an African, I am pleased to report that the continent is well represented. I was, in fact, pleased to see poems by two of my Facebook friends: Fondly and Amazon by Akor Emmanuel Oche (Nigeria) and Banana Republics by Mbizo Chirasha. The latter is a lengthy political poem, an African lament rich with metaphor, imagery and ethos. Other African poets included are: Warda Al Barbar (Algeria), Ashraf Amer (Egypt), Alexander Nderitu (Kenya), Jamal Eddine Benhayoun (Morocco), Breyten Breytenbach (South Africa) and Ines Al Ababasi (Tunisia).

As an art form, poetry is well known for its economy of words. What are Those Things and Freedom, short sweet poems by Humberto Akabal (Guatemala), demonstrate this, as do the three contributions by Hemante Divate from India.  Hemante’s Even Now I Don’t Understand sensually compares writing a poem to making love to a woman. He is a winner of the Bharatiya Bhasha Parishad Award (India) and the Maharashtra Foundation Award (USA).  WPA welcomes avant-garde poetry. One of the first verses to catch my attention when I first perused this book was a poem by Leonardo Melero Blanco (Venezuela) titled They Tried to Make Me Go to Rehab, I Said ‘No!No!No!’ Amy Winehouse. It’s a modernist tribute poem to troubled British singer Amy Winehouse who died of alcohol poisoning in 2011.

Many of the poems in the collection appear in translation. As a consequence, the reader sometimes wonders what may have been lost in translation. For example, one wonders how much more impactful New Testament by Adonis (Syria) would be in the original, seeing as how it is a critique about the ‘burdens’ of ‘distant languages’. One might even say that its presentation in English translation is a case of Dramatic Irony! Born in Syria and considered ‘one of the Arab world’s greatest living poets’, Andonis who currently resides in Paris has been a Nobel Prize for Literature nominee. Every language has a political connotation – a certain reality or ‘baggage’ – associated with it. When languages are translated, some of the baggage is often left behind.

There are a few typographical errors in the book, especially in the author profiles. All things considered, however, World Poetry Almanac (2015 – 2016) would make a great coffee-table book in the English-speaking world.

FULL DISCLOSURE: The author is one of the poets whose work appears in the WPA.
Posted by Alexander Nderitu at 5:23 AM 1 comment: 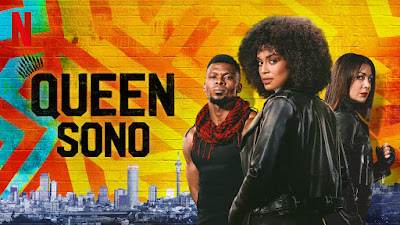 Queen Sono is an African crime drama starring South African actress and model Pearl Thusi (Quantico) as the title character. It was the first African-created Netflix Original to be commissioned, though not the first to be streamed. In it, a roguish female agent acts as the spearhead of an ultra-secret South African-based intelligence agency dubbed the Special Operations Group (SOG). From the get-go, the SOG has a lot on its plate. Even though its South African, it somehow has a continent-wide mandate. Two major blips on their radar are ‘Superior Solutions’, Russian-based arms dealers/organized criminals, and ‘Watu Wema (Good People) Brigade’, a revolutionary/terrorist group. Headed by psychopathic fitness buff, Ekaterina Gromova, SS are trying to essentially privatize the continent’s military, for their own benefit. Meanwhile, the stated mission of the homegrown Wetu Wema fighters is ‘to liberate Africa from the white man’s religion and the clutches of colonization.’ Overshadowing Queen’s high-risk job is her personal obsession with unraveling the assignation of her mother, Safiya Sono, a famous apartheid-era activist.

A kind of African-based Alias, the six-episode Queen Sono shifts between numerous locations – Zanzibar, Harare, Jo’burg, Nairobi, Boston etc -  which gives it an ‘international flavour’. It premiered globally in 190 countries, in February 2020.

The casting was expertly done. I had never heard of Pearl Thusi before this series. The 31-year-old South African is an accomplished actress and model. Her previous credits include the US television series Quantico and the romantic film Catching Feelings (also a Netflix joint and also written by Kagiso Lediga). I have a feeling that many male (and some female) watchers will emerge from Queen Sono with a huge crush on Pearl, and who can blame them? The lady has charm.

Incidentally, veteran Kenyan actor Raymond Ofula is in the mix, and in fine form, as Kenya’s ageing president.


Though the production is definitely ‘watchable’, it has several drawbacks. For example, it’s strange that, several years in, Queen doesn’t have a ‘legend’ to cover her identity as a secret agent. She unconvincingly lies to friends about being an art dealer. In Episode 1 (‘I Am Queen Sono’) her charming grandmother asks: ‘Are you a prostitute?’

Though the show is predominantly in English, many other languages are employed, including Afrikaans, isiXhosa, French, Russian, isiZulu, Shona, and Kiswahili. However, there’s a need for subtitles for long non-English dialogues, otherwise the viewers’ attention veers off. And speaking of language, there’s way too much swearing: ‘Fuck!’, ‘Bitch’, ‘Fucking!’, ‘Fuck all!’ This is Africa, not New York. Unless you live in some seedy part of town, we don’t swear that much, especially in business environments.

Some of the early episodes don’t have as much action as one might expect from a spy thriller. It’s commendable that the writers tried to humanize the narrative and add drama, but that’s not what espionage fans espouse in spy flicks. We were raised on James Bond, et al. Expecting mushy family drama in a spy series is like expecting a cuddle in a brothel. I acknowledge that there are some espionage fans that belong to the John Le Carré school of realistic (and often tragic) spook business, but we (for I am one) are clearly in the minority camp. Besides, Queen Sono is not based on a book series and is neither literally nor intellectual. It’s not as consistent as foreign rivals like Alias and Nikita. It could, however, be argued that ‘creative’ were building towards a climax. And the season does have a ‘flying finish.’ There’s enough tension in the last couple episodes to conduct electric power!

Episode 4 (‘Rookie’) takes us back five years and shows us how the current team coalesced. Why the writing team and editors decided to stick back stories there is a mystery, as it adds little value. The personal histories of the principal characters could have been doled out over the season or even several seasons. (The ending of Season One clearly anticipates a continuation.) And, to steal a line from the ERB battle rap between J. R. R. Tolkien and George R.R. Martin, ‘We don’t need the back story on every fucking tree branch!’

As for the physical fight scenes, I’ll give them an ‘average’ rating. It’s very hard to convince viewers that a female can beat up multiple males and with relative ease (although Angelina Jolie did a good job of it in Salt). Yes, we suspend our disbelief when we watch shows. And yes, this is ‘just entertainment’ but still…come on! It’s beyond the pale, unless the female is physically massive or has a weapon like a crowbar or machete. (It’s not even realistic for a martial-arts-trained male to beat up multiple men his own size. Maybe one or two.) There’s Action/Drama and then there’s Fantasy.

A vein of humour runs throughout the series. It turns out that the talented creator and head writer, Kagiso Lediga, has also worked as a comedian. He was the creator and writer behind Late Nite News, a satirical South African TV show.

The theme song is Disco Matanga by Kenyan boy band Sauti Sol, SA rapper Sho Madjozi and Real Black Motion. There are several other African tracks, including music by Simisola “Simi” Ogunleye, Babatunde Olatunji and Sampa the Great . In my opinion, Final Form by Sampa the Great should have been the theme song. It has a more relevant tempo, energy, beat and is about ‘Black Power’. Disco Matanga is too ‘bubble gum’ pop. The best thing about it is that it features Sho Madjozi (and that’s not ‘throwing shade’, it’s just how the cookie crumbled). Sauti Sol harmonies are great as usual but the song has no ‘wow factor’ and they sing in Luhya, a language that has few speakers outside Kenya. Given the show’s Pan-African feel, they should have sung in Kiswahili (which they have done before). Kiswahili is an AU-backed language with over 100 million speakers worldwide.

On a side note, I have been checking out Kenya’s ‘gengetone’ music trend and my conclusion is that when they start sounding like Sampa the Great, they will have reached their ‘final form’. (Now that’s shade!)

There’s no official word out on the budget but the show is visually stunning; great aerial and establishing shots of locales like Zanzibar and Jo’burg. Blockbuster movie-quality stuff. Brilliant. The one-camera setup was used properly utilized here. If this production deserves an award, it’s for cinematography.

Following its release, Queen Sono became the most-watched Netflix show in some African and Caribbean nations. The novelty of an African spy series is certainly one of the reasons for its success but I disagree with the punters who suggest it that’s the only reason. It’s a decent show, especially by African standards. I think that fans of the first season will tune in to future Seasons (hoping that more will be commissioned) to continue the adventure, to follow the story to its logical, arse-kicking, conclusion. Netflix also gave the production a strong marketing push.  I highly recommend it for home-based date nights - there’s eye candy for everyone! As the famous slogan goes, Netflix and chill! 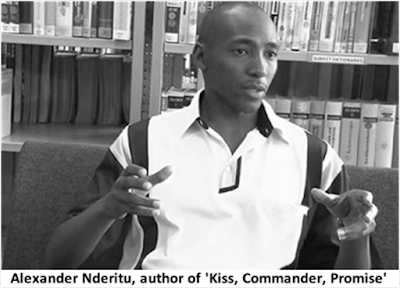 The reviewer is an award-winning Kenyan novelist, poet, playwright and critic. His collection of short stories – ‘Kiss, Commander,Promise’ – contains two spy stories (‘Kiss, Commander, Promise’ and ‘Life as Game’), one of which was nominated for an international award. Website: www.AlexanderNderitu.com

Posted by Alexander Nderitu at 4:19 AM No comments: