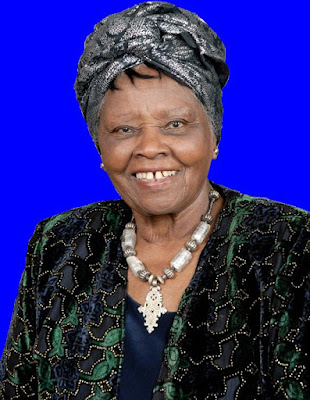 Veteran writer, businesswoman and broadcaster Muthoni Likimani was recognized, among other female ‘high achievers’, by President Uhuru Kenyatta, on August 23rd 2018. At a function held at State House Nairobi, the nation’s fourth President presented state honours to some of the women who have ‘championed equality and played big roles in encouraging other women’ to achieve more. ‘Kenya is a nation of strong women and we salute you,’ he said. President Kenyatta simultaneously launched the ‘trailblazer initiative’ whose remit is to identify and honour Kenyan women whose heroic works have significantly contributed to shaping the country. The awardees cut across political, social, economic and artistic sectors. Prof Leah Marangu, Muthoni Likimani and Mary Okello were conferred the Order of the Burning Spear (OBS) for their achievements in their respective fields. It is noteworthy that Ms. Likimani is the recipient of a previous Presidential Award, the Moran of the Burning Spear (MBS), which was conferred to her in 2008.

Muthoni Likimani, 93, is a prolific writer and motivational speaker and has given numerous public lectures at various fora, locally and internationally. A mother, grand-mother, and great-grandmother, Ms. Likimani is living history and has participated in numerous professions and held diverse positions in her long and colourful life. She has worked has worked as a broadcaster, teacher, publisher and author.  Some of her lesser known pursuits include being a beauty queen and a Councilor in the Nairobi City Council in her younger years. Her books include Passbook Number F.47927: Women and Mau Mau in Kenya, What Does a Man Want?, They Shall Be Chastised and Fighting Without Ceasing (a memoir).

In 2014, the International Forum for the Literature and Culture of Peace (IFLAC) appointed Muthoni Likimani as their ‘Peace Ambassador’ in Kenya. Announcing the appointment, IFLAC’s Founding President, Prof. Ada Aharoni, posted on the organization’s official website: ‘Our new IFLAC PEACE AMBASSADOR IN KENYA, Writer Muthoni Likimani is a role model for all women leaders in our global village! Welcome to the IFLAC family dear Muthoni!’ On her part, an elated Muthoni said, ‘Quite often, my advice has been on using power of the pen, not guns, to fight for one’s rights.’ In her capacity as IFLAC’s local Ambassador, she sourced peace-themed submissions from local writers for an international e-book anthology titled ‘Anti -Terror and Peace: IFLAC Anthology’ (2016). The anthology consists of articles, short stories, poems and haikus from 93 contributors in 23 different countries around the world. The Kenyan contributors are Muthoni Likimani, Henry Ole Kulet, Moraa Gitaa, Alexander Nderitu, Njeru Kathangu Mtumishi, Gilbert Muyumbu, Grace Ebby, Francline Allan and Jacob Oketch.

Born in Murang’a County in 1926, Muthoni Likimani was lucky to get an opportunity to travel to the London School of Hygiene (UK) for a nutrition course in 1958. While studying in London, her fluency in the Kiswahili language landed her a job with the British Broadcasting Corporation (BBC). Ten years later, she landed in Jerusalem for training in journalism and broadcasting at Kol Yisrael college. On her return to Kenya, she worked for the Voice of Kenya (now Kenya Broadcasting Corporation) and started a marketing/PR firm called Noni’s Publicity. In 1994, she received the National Council of Women of Kenya (NCWK) National Award ‘in Recognition for Exemplary Service to Women Advancement in Kenya’.  In 2005, she was awarded the Public Relations Society of Kenya (PRSK) Golden Honour Award for Outstanding Leadership of Service to the Public Relations Profession.

Affectionately known as ‘Cucu’ (grandma) to young scribes, Ms. Likimani is also the chairperson of FEMTEL Women Writers Association, and the patron of PEN Kenya Centre which promotes literature and champions Freedom of Speech.

Below are some photos from her eventful life:


The author of this article is a writer/critic and the outgoing Deputy Secretary-General of PEN Kenya Centre. he can be contacted at www.AlexanderNderitu.com
Posted by Alexander Nderitu at 1:18 AM No comments: