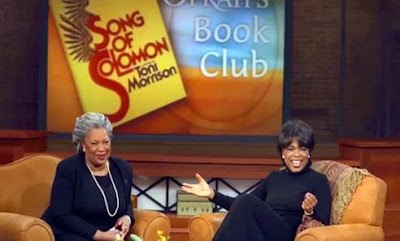 Song of Solomon, a novel by Toni Morrison (USA), used to sell about 50,000 copies a year before it became an Oprah Book Club Selection. The year after the book and author were featured on Oprah’s TV show, sales soared to an estimated 500,000 copies. Cameroonian Imbolo Mbue, then 18 years old, was one of the people Oprah inspired to read the book. Many years later, Imbue was interviewed by the talk show queen about her own novel, Behold the Dreamers. In the July 2017 issue of the O magazine (whose cover featured Oprah holding a copy of Imbue’s book), Oprah wrote:

There are few things I love more than discovering a favourite new writer. That’s the joy I felt when I came upon Imbolo Mbue’s debut novel. Exquisite.

Below are some lessons gleaned from Kathleen Rooney’s thoroughly enjoyable book, Reading with Oprah: The Book Club that Changed America:

---
Source: ‘Changing the Literary Map of Africa’ (2019): https://tinyurl.com/LiteraryMapofAfrica
Posted by Alexander Nderitu at 5:40 AM