The Return of Gunga Din! (poem) 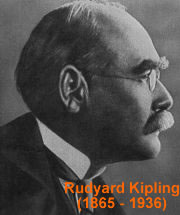 When your countree’s not at war and politicians are shaking hands,
You need to thank Brahma for the peace in your land,
For when them guns start chattering and explosions mushroom
Then it’s ‘Goodbye, suburban mansion; ‘Ello, refugee camp!’

Now in Injia, where I was born and bred,
We have ‘ad our fair share of war and death
And nobody knows that better than me –
In many a conflict, I served as the regimental bhisti .

You may think that tanks, rifles and ammunition
Are the main battlefield requirements but ‘tis actually your water ration:
Believe me when I tell that many a soldier
Has lain on the corpse-scattered battleground whispering, ‘Water…water.’

Of all them sa’ibs I served in their most desperate hour,
I best recall an Englishman called “Rudyard Kiplin’. “
‘E thinks I’m dead but I’m still breathin’ –
I did get shot while taking him some life-saving water,
As ‘e lay in the dust with a bullet in his spleen,
But when everyone thought I was dead, I was shammin’!

Rudyard was a right good feller – I‘ll tell you that for nothin’;
Always ‘ad stories to tell – ‘e made us cry, ‘e made us larf.
‘E was born right ‘ere in Bombay and ‘e often called me ‘brother’;
‘E told me ‘is dream was to become a respected writer.

‘E was a strange one, that one – always scribbling in ‘is notebook.
When we asked, ‘e said ‘e was writing some kinda ‘Jungle Book .’
‘E’d pause from ‘is writing to scratch ‘is shoe-brush moustache;
‘E said ‘e wasn’t ‘appy unless ‘is work ‘ad ‘that magical touch’.

The last time I spied sa’ib Rudyard Kiplin’,
‘E was lying on the battleground yelling, ‘Gunga Din!’
The war was like them epic battles of the Bhagavad-Gita;
We were behind the fight and I prayed to Lord Shiva
As I sped towards sa’ib, bullets singing in my ears.

‘E once told me ‘e didn’t come all the way from Cool Britannia
To be nobody’s prisoner, caged like some exotic tiger;
If ‘e was wounded and the enemy came over to claim the prize,
‘E’d turn ‘is rifle to hisself and go to ‘is God like a soldier!

After drinking the water I gave ‘im, ‘e seemed much better
But we were still in the gravest of danger -
The minute I stood up, a rose of blood blossomed from my chest.
The pain that spread was akin to a blacksmith’s fire
But I decided to play possum rather than risk another bullet:
The sa’ibs were going down like flies and I didn’t want to be next!

I later learnt that sa’ib Kiplin’ survived and became a great writer.
‘E was given so many awards, ‘e even started turning ’em down .
’E was even kind enough to write about ‘is wartime brother, Gunga Din,
But ‘e couldn’t understand ‘y I risked my life for his.
Sa’ib, I’m an illiterate bhisti but you have so much to offer.
Though we made fun of your moustache and English accent,
By the living God that made the world we live in,
You’re a better man than me, Rudyard Kiplin’!

Bombay – Now Mumbai. In Kipling’s time, it was called Bombay. The house in which he was born, in December 1865, is still there.
Kipling’s ‘Jungle Book’ string of stories later became a big hit with kids and was turned into movies by producer Alexander Korda and the Walt Disney Company
Kiplin’, sorry, Kipling accepted the 1907 Nobel Prize for Literature but turned down both a knighthood and the post of British poet laureate. Go figure.
﻿(c) Alex N Nderitu http://www.alexandernderitu.com/