Zen and the Art of Laughing (Poem) 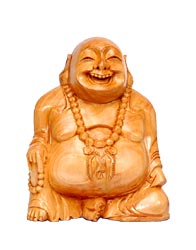 ‘If you want to be happy, be.’ – Leo Tolstoy
(Bikkhus = Senior disciples)

Have you seen those “good luck” statues of a laughing Buddha?
If not, then allow me to paint a picture:
A bald angular head crowns a most unusual figure
Where a laughing mouth conflicts with the nose above
And beady eyes peer out of a face that only a mother could love.
The ear lobes droop all the way to the stout shoulders
(Just thinking about them makes me shudder!)
And a bare chest reveals nipples that would be any woman’s envy.
Below that is a gut that puts the ‘pot’ in ‘pot belly’
And it is this pot that people rub for luck.
The tiny legs are tucked under the body in the lotus position
Which leads one to assume that he must have wobbled like a duck
(The legs and body are completely out of proportion.)

I’ve had people say of this Zen artifact:
‘I wouldn’t be laughing if I was that fat!’
And ‘Who’s this supposed to be? The Asian Fat Albert?’
But the pessimistic critics are forgetting the fact
That the Buddha was ‘The Enlightened One’
Who gave us the Noble Truths and the Middle Path.
He passed through the doors of knowledge,
And walked down the corridors of wisdom.
Despite his rotund frame and shoddy condition,
The Buddha is laughing for a very good reason:
He sees the glass as half full not half empty.
Instead of concentrating on the negative things in life,
He has chosen to a path that leads to HAPPINESS and light.

Now this, O Bikkhus, is the Noble Truth concerning ‘positiveness’:
Verily, it is the exorcism of the demons of negativity;
The turning away from, the disassociation with, the alienating of,
The torpedoing of, the harbouring no longer of negative thoughts.
Instead of being negative, seek out the silver lining around each cloud:
Spouse divorcing you? – Hurrah! You’re re-gaining your freedom!
(If I were you I’d ask the judge to hurry the case)
Going bald? – I’d say you’re “gaining face”!
Lover “moving on”? – That translates to more breathing space!
(Hey, with mass pollution, fresh air is hard to find these days!)
Got fired from your job? – That should get you out a rut!
Hospitalised? – Relax while others sweat it out in the rat race!
Wife put on extra pounds? – Well, now there’s more of her to love!
Lost a leg in the war? – I know a guy who lost both!
(And a few that lost their lives, God bless their souls)
Feeling old and tired? – Wine gets better with age and so do you!

Now this, O Bikkhus, is the Noble Truth concerning laughter:
Verily, laughter is the outward show of inner joy
That often finds expression in repetitive gleeful noises and bodily paroxysms.
Laughter burns calories and releases good hormones,
Therefore learn to laugh at your problems like the Buddha.
You can laugh ‘HE-HE-HE’ like a horny hyena
Or ‘HA HA HA!’ like an overjoyed winner
Or ‘HO! HO! HO!’ like dear old Santa
But make sure you laugh right from the belly,
Letting your shoulders shake like a volcanic tremor.
In the aftermath, a feeling of peace will wash over you like hot lava.
In a chaotic world, laughter can prevent you from developing an ulcer
So start laughing your way to a healthier life right now –
At any rate, you won’t be laughing when you’re six feet under.

‘Decay is inherent in all component things. Work out your your own salvation with diligence.’ - Siddhartha Gautama (The Buddha)