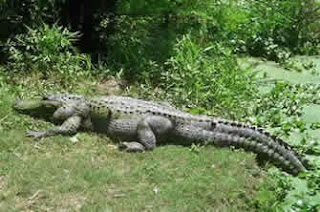 On the bank of the sluggish river the crocodile lies, basking.
‘Where will my next meal come from?’ it seems to be asking.
Its crooked mouth gives the false impression that it is smiling
But woe to any creature that is fooled into trespassing
For the previously motionless reptile will strike like greased lightning!
For two hundred million years, the croc has been swimming
Through rivers and lakes, terrorizing just about everything.
Lying half-sunk in the water, it appears to be a log that is floating
But it’s actually awake and studying the herbivores that are drinking.
The water erupts…saw-like jaws flash…and the victim is suddenly drowning!
Should the flesh be tough, the croc bites down and starts spinning.
Large chunks of meat are swallowed without chewing
And then the dragon swaggers ashore for some relaxing.
It opens its powerful jaws (which helps in digesting)
And the Mona Lisa smile is replaced by cold-blooded laughing.
Many regard this plated relic with fear and loathing
And have eliminated an entire species through ruthless gunning
But there’s much to learn from this fascinating thing
That must surely know the secret to healthy living:
It never falls sick and never bothers with exercise or dieting!
Long before humans made the scene, it was still breathing
And after we’re gone, it’ll probably still be here, smiling.